Conservative Trump supporters got some great news over the weekend. The probe into Biden family corruption is officially underway. Attorney General William Barr confirmed that the Department of Justice has set up a system for the President’s personal attorney, Rudy Giuliani, to provide them with the evidence he uncovered.

Republican Senator Lindsey Graham announced on Sunday that Attorney General William Barr is investigating Joe and Hunter Biden. The DOJ, he reports, has “created a process that Rudy could give information and they would see if it’s verified.” They’re giving the Bidens a lot more courtesy than the Obama regime gave President Trump. Christopher Steele’s allegations weren’t confirmed at all before they were illegally used to spy on Trump Tower.

Hunter Biden, an admitted crack addict with an affinity for strippers, was given a high paying seat on the board of directors for the Burisma company. The job strongly appears to be nothing but an attempt to bribe Joe Biden, who was Vice President at the time. Joe Biden is also in hot water for pressuring the Ukraine to remove a prosecutor exposing Burisma.

Quid Pro Joe withheld millions of dollars in foreign aid until they complied. Democrats changed the subject every time it came up at the impeachment hearing, because that’s exactly the same thing they were trying to impeach President Donald Trump for. 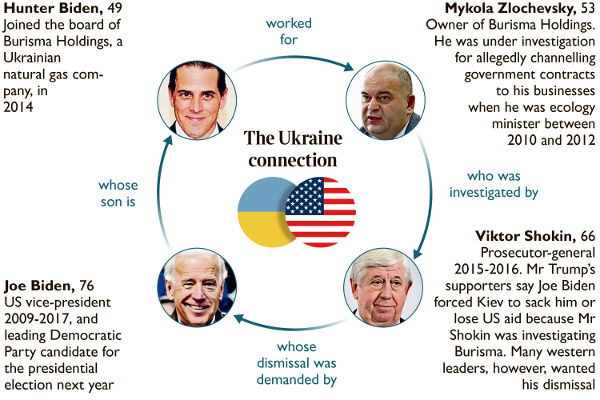 Since Barr and the DOJ are handling the Biden corruption probe, Graham says he’ll concentrate on the FISA abuse and get to the bottom of how the whole treasonous plot to remove the president got started. The Foreign Intelligence Surveillance Court is furious that the Federal Bureau of Instigation intentionally lied to them. It now appears that all four of the wiretap warrants were obtained illegally.

FBI Director Christopher Wray just admitted under oath to the House Judiciary Committee that their warrant applications were fiction. Rep. John Ratcliffe grilled him about the illegal spying. “The report acknowledges that this was illegal surveillance with respect to at least several of these FISA applications, because there was not probable cause or proper predication, correct?” All Wray could do was agree. “Right.”

President Trump used that to justify a tweet with the caps lock on. “FBI Director Christopher Wray just admitted that the FISA Warrants and Survailence (sic) of my campaign were illegal. So was the Fake Dossier. THEREFORE, THE WHOLE SCAM INVESTIGATION, THE MUELLER REPORT AND EVERYTHING ELSE FOR THREE YEARS, WAS A FIXED HOAX. WHO PAYS THE PRICE? This is the biggest political crime in American History, by far. SIMPLY PUT, THE PARTY IN POWER ILLEGALLY SPIED ON MY CAMPAIGN, BOTH BEFORE AND AFTER THE ELECTION, IN ORDER TO CHANGE OR NULLIFY THE RESULTS OF THE ELECTION. IT CONTINUED ON WITH THE IMPEACHMENT HOAX. Terrible!”

Don’t get your hopes up.

Barr confirmed Graham’s statements on Monday, noting that the DOJ has an “obligation to have an open door to anybody who wishes to provide us information that they think is relevant” but don’t hold your breath. “Ukraine can be a dubious source.”

“There are a lot of agendas in the Ukraine, there are a lot of cross currents, and we can’t take anything we receive from the Ukraine at face value. For that reason we had established an intake process in the field so that any information coming in about Ukraine could be carefully scrutinized by the Department and its intelligence community partners.”

We’ve all heard that arrests are about to happen so many times now that nobody is getting their hopes up, but Senator Graham insists it’s going to start happening sooner rather than later. “Half the people behind the Russia investigation are going to jail,” he said. What makes this comment so significant is that the same man who named Eric Ciaramella as Schiff’s whistleblower, Greg Rubini, also claims, “Dirty cops Peter Strzok and Andrew McCabe will both be arrested this week, maybe even Monday or Tuesday.”