Democrat candidate Joe Biden tried to do some coronavirus related social-distancing with a town hall style webinar. His event was so infected by disorganization that the only thing it accomplished was distancing Quid Pro Joe from his potential voters.

To make up for canceling a rally in Chicago, Joe Biden tried the high tech approach of appearing remotely. On Friday night, the former Vice President was supposed to host a “virtual town hall.” Things got a little too complicated for his campaign staff, who bungled the set up of a live question and answer session.

Allegedly accessible by phone and the Zoom videoconferencing app, the webinar was to be broadcast on Facebook Live. The whole gruesome debacle was so infected with errors it seemed like one long phone network commercial. “Can you hear me now?” They finally got the Facebook feed on the air only four minutes before the end of the show.

Campaign staffers should be better prepared for the next time, but Friday night’s experience made them seem like they were trying to merge onto the information superhighway in a smart-car.

One technical glitch after another pushed the start time back by two hours. Even then, the first 15 minutes were devoted to a video that, according to CNN, “alternated between confused-looking Democratic Sens. Tammy Duckworth and Dick Durbin of Illinois, as well as Vivek Murthy, the former surgeon general and a member of a committee advising Biden on how to handle campaigning amid a pandemic.”

When they finally got the event started on Zoom, Durbin presented a few remarks, but nobody on Zoom could see him. Facebook was still dark. When Biden got hooked in, he was visible but nobody could hear him. “His audio was so choppy that it could not be understood.” They fiddled around for a while trying to fix that but couldn’t get it going. 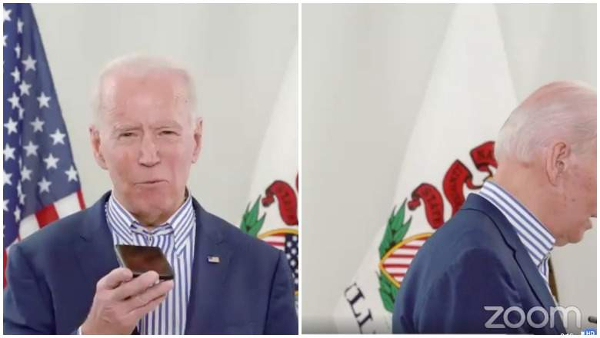 It went downhill from there

Stopping and restarting the app didn’t improve Joe’s audio so they switched over to Dr. Murthy, who spoke briefly. Things went downhill from there when the question and answer session started.

Those attending could indicate they had a question. That part seemed to work. The first question raised was a comment. “Mr. Biden’s speech was garbly the entire time.” They switched to caller two and got dead air. Biden still wasn’t “live” on Facebook but his staff gave him a cell phone to tuck under his chin for audio. That worked. He was able to be clearly heard asking “Am I live?” and “Am I on camera?”

For about 10 minutes, questions were asked and answered. Suddenly, the Facebook stream miraculously appeared along with an instant audience count of 5,000. He was caught at the end of an answer for about 20 seconds then they tried to switch to “Maureen.” She wasn’t there. “Maureen?” asked an aide. “Maureen, are you there?” Echoed Biden. After about “two minutes and 20 seconds,” CNN writes, “Biden walked off camera. He was replaced by an ‘Illinois for Biden’ sign as he answered a final question.” Only “four minutes and 31 seconds in, the Facebook Live stream ended, the Zoom feed shut off and the event was over.”

Campaign Apologizes for the errors

Right after the social media apocalypse, staffers started sending emails apologizing for the confusion. They included a helpful transcript of Biden’s inaudible speech. “Thank you for your patience as we continue developing our virtual town halls and ensure voters have the opportunity to connect with Vice President Biden as he lays out his vision for America.”

Conservatives have seen Biden’s vision for America and say it needs a pair of glasses. Trump’s the one with the 2020 vision.