The left-wing network media wants everyone to think there’s some kind of secret plot to purge disloyal rats from “the bowels of the federal government.” The truth is that there’s nothing hidden about it. The “purge” is real. The infamous “hit list” is real too. “I don’t think it’s a big problem,” President Trump acknowledged. Neither do his deplorable supporters. Once again, President Donald Trump is doing exactly what he said he would do.

Nothing secret about it

On Monday, White House spokesman Hogan Gidley went on Fox News to clarify the confusion surrounding the recent “purge” of disloyal rats from the Trump administration. “Time and time again we see in the media,” he notes, “reports from people in the bowels of the federal government working against this president.” The cleanup won’t be confined to the intelligence community and the Department of Injustice. The terminations last week were only a drop in the bucket compared to the flood about to come. As Gidley confirms, “It’s not a secret that we want people in positions that work with this president, not against him.” They’re on a mission to seek and destroy. “When we find them we will take appropriate action.” 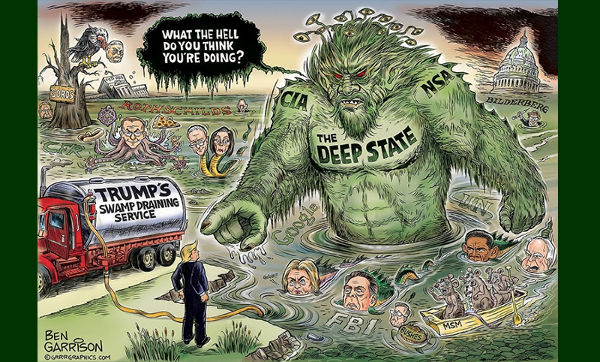 President Trump is fully behind the housecleaning, as Gidley points out. “The president’s been pretty clear about the fact he wants people in this administration who want to forward his agenda. Donald Trump was the only one elected. He was the only one that the American people voted for. They didn’t vote for someone at any of these other agencies, any of these other departments.” Talking to reporters in India, Trump also confirmed the “hit list” that liberals have been whining about for days. Sure they have a list, why not? “I don’t think it’s a big problem,” Trump shrugged. “I don’t think it’s very many people.” He wants civil servants who are “loyal to our country.”

There are roughly 4,000 “political appointees” named by Trump that he can fire at will. Gidley made it crystal clear that the administration’s swamp draining will go a lot further than that. They’re sifting through the “millions” of individuals in every federal agency to identify employees who make active efforts “to undermine President Trump.” That includes all the “career employees” who are protected by law from “political retaliation.” These people aren’t going to be fired because they express a political opinion, they will be fired because they defy orders and allow their opinions to interfere with their job.