A special charter flight will touch down in Yokohama, Japan, to rescue stranded American tourists on Sunday evening. President Donald Trump ordered the evacuation of more than 400 U.S. citizens who were beached aboard the Diamond Princess cruise ship by quarantine precautions.

President Trump to the rescue

On Saturday, the U.S. Embassy in Japan wrote a letter to the 400 American passengers stuck on the Diamond Princess, alerting them to the rescue mission. Their charter flight will arrive Sunday evening and return them to the United States. They’ll still be quarantined but at least they will be able to get off the densely packed and contaminated ship.

Ever since February 3, the passengers have been held prisoner on the ship, docked in the port city of Yokohama. When a passenger who had departed the Carnival Cruise liner in the previous port, Hong Kong, was diagnosed with the coronavirus, authorities radioed ahead to warn Japan.

Outside of China, there are more cases of the 2019-nCoV virus bioweapon on board the Diamond Princess than anywhere else on the planet. So far, 285 of the ship’s 3,700 passengers have tested positive for infection. As new cases are identified, they are removed from the ship and taken to nearby hospitals for treatment. 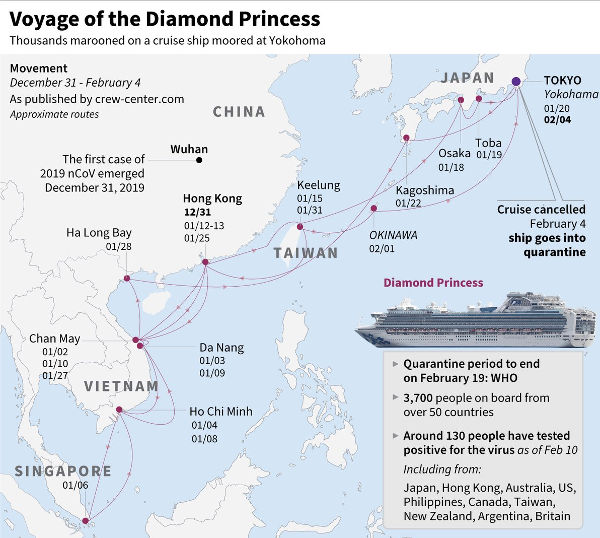 The ride home is optional

Passengers don’t have to accept the free ride home but they’re advised to strongly consider it. According to the embassy letter, citizens are recommended to leave the ship and return home “out of an abundance of caution.” Once they get back to the states, passengers will be isolated for another 14 days. While there was some grumbling, most of the Americans are practical about the offer. “They are very concerned about spreading the virus, and there’s no good way to transport people from Japan without possible transfer of virus, so it is the logical thing to do,” notes Sawyer Smith.

If they choose not to return on the charter flight, they would be on their own and not able to return for an indeterminate “period of time.” The final decision on releasing the passengers would be up to the Centers for Disease Control and Prevention. “We understand this is frustrating and an adjustment, but these measures are consistent with the careful policies we have instituted to limit the potential spread of the disease,” the letter reads.

Those who accept the offer will be screened by medics before they board the plane. Anyone showing the slightest symptoms will be separated out and treated in Japan. The Japanese government appreciates the help. They say that taking 400 passengers off their hands will ease the burden. Once fully loaded, the plane will return to the United States, landing first at California’s Travis Air Force Base. Some passengers will remain there and the rest will continue on to Lackland AFB in Texas.