Surgeon General Jerome Adams has an urgent warning for America. Things are going to “get bad” this week so it is absolutely crucial that everyone stay at home, whether they have been ordered to or not. America’s highest ranking doctor issued what CNN calls “his starkest warning to date.”

Surgeon General warns everyone to stay at home

Dr. Jerome Adams, the U.S. Surgeon General, isn’t convinced that Americans are taking the current threat seriously enough. He went on NBC Monday morning to tell everyone that he’s shocked by what he’s been seeing. Despite a third of all Americans under forced quarantine, and the rest of America urged to “hunker down” voluntarily, “there were more people” wandering around sniffing Washington’s famous cherry blossoms “than there were blossoms.”

Adams is appalled that people don’t seem to understand how important this is. “This is how the spread is occurring. Everyone needs to be taking the right steps right now. Stay home.” The last thing we need is close contact with strangers. “I want America to understand,” Adams exclaimed, “this week, it’s going to get bad.”

“We really, really need everyone to stay at home.” He knows most are trying to do their part but not everyone. “I think that there are a lot of people who are doing the right things,” he notes, “but we’re finding out a lot of people think this can’t happen to them.” Which is exactly why so many new cases popped up from beachgoers.

As of Sunday night, more than 100 million citizens are under mandatory lockdown restrictions. The virus has already struck over 41,000 Americans and killed at least 499, so far. 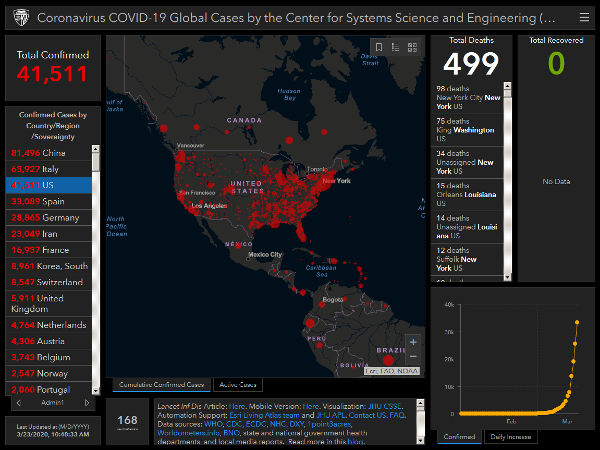 Half way through the 15-day plan

About a week ago, President Donald Trump implemented a 15-day national action plan. By the end of this week, we should have a better idea of exactly where we stand. The administration plans to take a hard look at the situation and if necessary, shift our tactics. President Trump tweeted about it in the wee hours of Monday morning.

“We cannot let the cure be worse than the problem itself,” Trump tapped out in caps. “At the end of the 15-day period, we will make a decision as to which way we want to go.” Experts, including “Dr. Deep State,” Anthony Fauci, think that Americans will need to be locked down for a lot longer. They are now talking about quarantines “affecting large segments of the American public” for another 10 to 12 weeks. That might do more harm than good.

This week will tell the tale. Either the curve will flatten as hoped, or we’re going to have to try a different approach. One of the things that’s being kicked around is simply learning to adapt. President Trump knows that we’ll pull through this one way or another but he’s already thinking pragmatically. Conservative ally Matt Schlapp backs him up.

“I think it is soon becoming time to have old and/or sick people take every precaution and healthy people go back to work forever changed w(ith) new habits in a grimmer reality,” he tweeted. Former Tennessee Senator Bob Corker agrees. “I agree 100%, @realDonaldTrump.” He hasn’t always in the past.